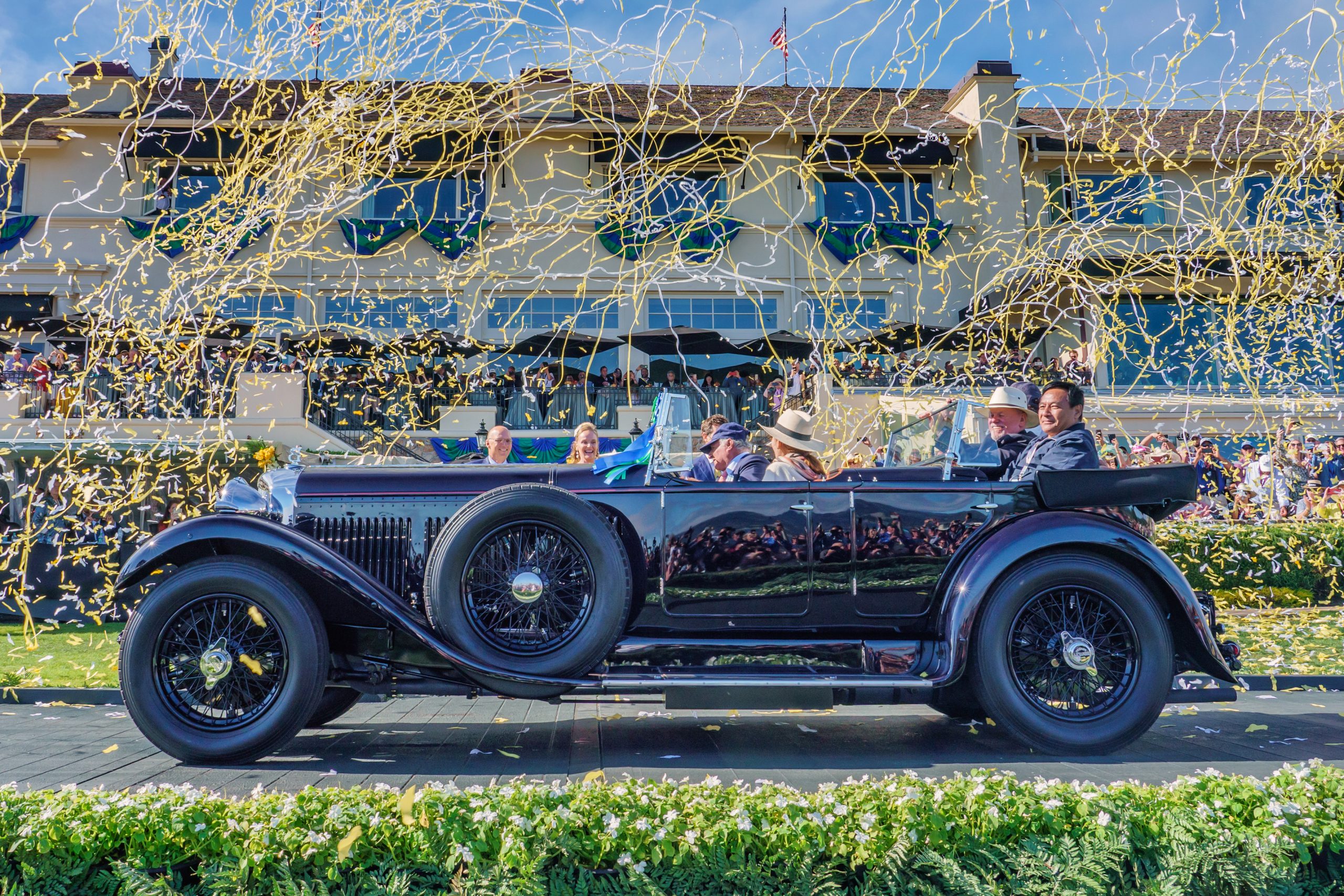 2019: 1931 Bentley 8 Litre Gurney Nutting Sports Tourer
Special enough in their own right, only about 100 examples of the massive 8 Litre were produced by Bentley, either in 156- or 144-inch wheelbase. As was the custom, Bentley built the chassis and drivetrain and shipped the cars to various coachbuilders for finish work. J. Gurney Nutting and Co., Ltd. of Chelsea specialized in sporting coachwork and built bodies for the Royal Family. Just two Gurney Nutting Sports Tourer bodies were built on short wheelbase Bentley 8 Litre chassis, including this car, which was restored in 2004 and acquired by Sir Michael Kadoorie a Hong Kong billionaire and chairman of CLP Holdings.

2018: 1937 Alfa Romeo 8C 2900B Touring Berlinetta
Originally unveiled at the 1937 Milan auto show, and later exhibited in Berlin in 1938, this 1937 Alfa Romeo 8C 2900B Touring Berlinetta was bodied by Zagato. The car underwent a full restoration by RX Autoworks in Vancouver, British Columbia. The car was acquired by David Sydorick who commissioned the restoration. Sydorick is a retired investment broker and a notable collector of Alfa Romeo and other Italian vehicles.

2017: 1929 Mercedes-Benz 680S Barker Tourer
This 1929 Mercedes Benz 680S was originally commissioned by Francis Curzon, the 5th Earl of Howe, winner of the 2-Litre class at the 1930 24 Hours of Le Mans, and the namesake of the Earl of Howe Trophy presented to the highest placing British driver in the Indianapolis 500. The vehicle started life as a Model S Roadster, but was upgraded to Super Sport specification with a 7.0-liter supercharged inline six. Barker of London provided the stunning coachwork, finished in cobalt blue and polished stainless steel. The vehicle was acquired by Bruce McCaw of Bellevue, Washington, who embarked on a three-year restoration. McCaw founded McCaw Cellular which he sold to AT&T in 1997.

2016: 1936 Lancia Astura Pinin Farina Cabriolet
This is the first — and still only — Lancia to ever score a Best of Show award at Pebble Beach. Featuring Lancia’s extremely narrow 19-degree 2.9-liter V-8, the engine itself is a work of art. It features just one cylinder head and a single camshaft for both banks of four cylinders. Pinin Farina provided the coachwork for this undeniably special automobile, but just 26 years after its construction it was located in poor condition, “enveloped by a hedge” in England. The car underwent its first restoration and it was eventually purchased by Eric Clapton. Years later it was acquired by Richard Mattei in 2009, who subjected the car to a six-year restoration at the hands of Jim Stokes Workshops in England for the mechanical work and finish work by Jeff McDonald of Portland, Oregon.

2015: 1924 Isotta Fraschini Tipo 8A Worblaufen Cabriolet
In 1924, Italian manufacturer Isotta Fraschini built the engine and chassis under the exquisite bodywork you see here. However, it wasn’t shipped to Carrosserie Worblaufen, F. Ramseier & Co. near Bern in Switzerland for finish work until 1931. The vehicle was on display at the Geneva Motor Show in 1932, and later went on to win the Grand-Prix d’Honneur at Cannes a year later. The vehicle was owned by Jim Patterson, of Louisville, Kentucky, who founded Long John Silvers in 1969 and went on to found a number of companies including Chi-Chi’s restaurants.

2014: 1954 Ferrari 375 MM Scaglietti Coupe
Another first and only, 2014 was the first and still only time that a Ferrari won the Best of Show. It’s also the latest vehicle to have ever won, the only car from the 1950s to have ever won, and only the second post-War vehicle to win since 1968. It was ordered by Italian film director Roberto Rosselini, father of Isabella Rossellini and husband of Ingrid Bergman. It originally began life as a Pinin Farina-bodied competition car, but following an accident, it was sent to Scaglietti, where it became the coachbuilder’s first passenger design for Ferrari.  The car was owned by Jon Shirley, former president, COO and chairman of Microsoft.

2013: 1934 Packard 1108 Twelve Dietrich Convertible Victoria
Packards and Duesenbergs seem to be just about the only American cars that have had success pulling Best of Show honors at Pebble Beach. This 1934 1108 Twelve Dietrich Convertible Victoria was one of just three Convertibles Victorias to exist when the car won in California, out of just four ever built. “We’re here in America and an American car finally won,” said the owner, Judge Joseph Cassini of West Orange, New Jersey. “It’s nice to see that even the European judges found (the Packard) significant enough to win Best of Show as an American car.” Unlike the captains of industry that usually bring winning cars to Pebble Beach, Cassini served the public as a Superior Court in New Jersey, for 22 years.

2012: 1928 Mercedes-Benz 680S Saoutchik Torpedo
In 1928, Mercedes-Benz shipped this supercharged, 6.8-liter Mercedes-Benz to Russian emigree, Jacques Saoutchik, who had founded his coachworks in France in 1906. This stunning Benz made its debut at the 1928 New York Auto Show, where it was purchased off the show floor by Frederick Henry Bedford, the chairman of Standard Oil. In 2012, the Mercedes-Benz was shown at Pebble Beach by Paul Andrews, who was the founder and CEO of international electronics firm TTI.

2011: 1934 Voisin C-25 Aerodyne
Only two of French aviation pioneer Gabriel Voisin’s cars have been awarded Best of Show at Pebble Beach in 68 events. Citing the trauma of the military use of his aircraft during World War I, Voisin switch production to automobiles immediately following the conflict, building some of the world’s finest luxury cars in the 1920s, until the stock market plummeted in 1929, and Nazi Germany’s invasion of France forced his factory to close in 1940. As impressive as the outside of this 1934 C-25 Aerodyne is, the interior is staggering, with a hypnotic upholstery pattern that needs to be resurrected in 2021. The car was shown by Peter Mullin, a French car enthusiast who made 27 attempts at a Best of Show award before 2011. Mullin is founder of the M Financial Group, as well as the founder of the Mullin Automotive Museum in Oxnard, California.

2010: 1933 Delage D8 S deVillars Roadster
This titan made its debut at the 1933 Salon de Paris. The car’s first owner was the son of Alejandro Lerroux, the Prime Minister of Spain. Following his ownership, the car was reportedly once used to transport guests to and from the Gran Hotel Velasquez in Madrid. From there, the car languished in storage for four decades, Like the Isotta Fraschini that won in 2015, this car was acquired by Jim Patterson at RM Auctions’ 2007 Monterey Sports & Classic Car auction. The 2010 Pebble Beach Concours d’Elegance was the first time the car had been shown publicly in over 50 years.