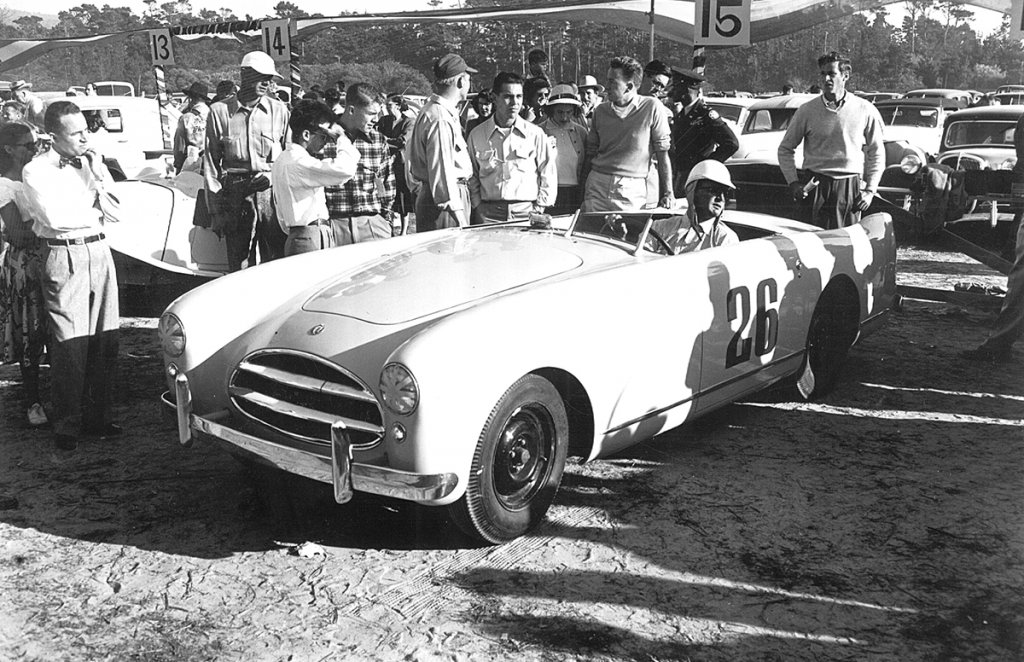 Sterling Edwards is one of the most influential figures in the history of the Pebble Beach Concours d’Elegance. He took home the first Best of Show award, and he remains the only participant to win it in a car he designed himself. On a secondary level, he also played a pivotal role in creating the event.

Born into a wealthy family of San Francisco-based industrialists, Edwards began exploring ways to develop and build his own car after spotting a Cisitalia 202 on a winter trip to the Swiss Alps in 1948. He envisioned a sporty, dual-purpose car that could be comfortably driven on the road during the week and fearlessly raced on the weekends. He enlisted an all-star team of visionaries to bring the project to life.

Mechanical engineer Norman Timbs helped make the R-26 roadster a reality. Instead of using an existing chassis, the Edwards team started from scratch and designed a tubular frame onto which a hand-made aluminum body could be attached. Power came from a Ford-sourced, 2.5-liter (153-cubic-inch) flathead V8, though several racing-focused modifications were made to it by Eddie Meyer Engineering before it was bolted to a three-speed transmission and dropped into the engine bay. Rated at 125 horsepower in its basic state of tune, the R-26 was fitted with an independent suspension on both axles and a braking system reportedly sourced from a Beechcraft Bonanza airplane and modified for use in a car.

Well-known race car builders Emil Diedt and Lujie Lesovsky were hired to build the R-26 and finished it in 1949. The end result was exactly what Edwards ordered: a true dual-purpose car. It featured a windshield, a removable metal hard top, and four leather-upholstered seats in its street configuration. On the track, Edwards could remove the top, replace the windshield with racing shields, and hide the rear bench under a tonneau cover. Although he was far from being a household name in the automotive industry, Edwards had successfully created a car that starred on the cover of Road & Track in December 1949. The R-26 Roadster was ready to compete, but most major road races were held on the East Coast.

Edwards knew John B. “Jack” Morse, the president of the Del Monte Properties Company. He pointed out that road-racing was becoming hugely popular on the other side of the country and argued there was no reason why this success couldn’t be replicated in the vicinity of Pebble Beach. Morse agreed, and the first edition of the Pebble Beach Road Races was scheduled for November 1950. The now-famous Concours d’Elegance was added to the program to give racers and enthusiasts the chance to socialize.

Historical records suggest Edwards didn’t initially sign up for the first Concours d’Elegance; he primarily wanted to race, largely because he hoped a victory would help him promote his car. His decision to display the R-26 on the lawn was seemingly an afterthought. The bet paid off and the roadster was crowned Best of Show, beating about 30 other cars. It wasn’t as successful in racing. While it won first in its class, it finished the main race in 14th position, far behind the winning Jaguar XK120 driven by Phil Hill.

Edwards continued to race in a wide selection of events during the 1950s. He built a follow-up to the R-26 called R-62 that featured a Henry J frame, a Chrysler-sourced Hemi V8, and an innovative fiberglass body. It wasn’t as victorious as he hoped so he stopped competing in cars he designed in 1952. He switched to a Jaguar C-Type that year, moved to a Ferrari 340 MM in 1953 (which he drove to victory in the 1954 Pebble Beach Road Races), and raced a Ferrari 750 Monza starting in 1955. In parallel, he launched a luxurious, fiberglass-bodied convertible called America that was well received by journalists and enthusiasts alike. Financial issues ended the model’s career after five examples were made.

As for the R-26 Roadster, most historians agree it was dismantled and rebuilt with a more race car-like body in 1952. Its original body was shipped to Illinois, where it received a fresh coat of paint, a new chassis, and a straight-six engine from a Jaguar XK120. It later made its way into Lee Roy Hartung’s sizeable collection in Glenview, Illinois, and it remained in the museum until his death in 2011. Auction house RM Sotheby’s sold it for $143,750 in November 2011. At the time, it was painted red and fitted with a white top. It was dusty and not 100% original but it looked surprisingly well preserved.

Time will tell whether it makes a triumphant comeback to the Pebble Beach Concours d’Elegance.