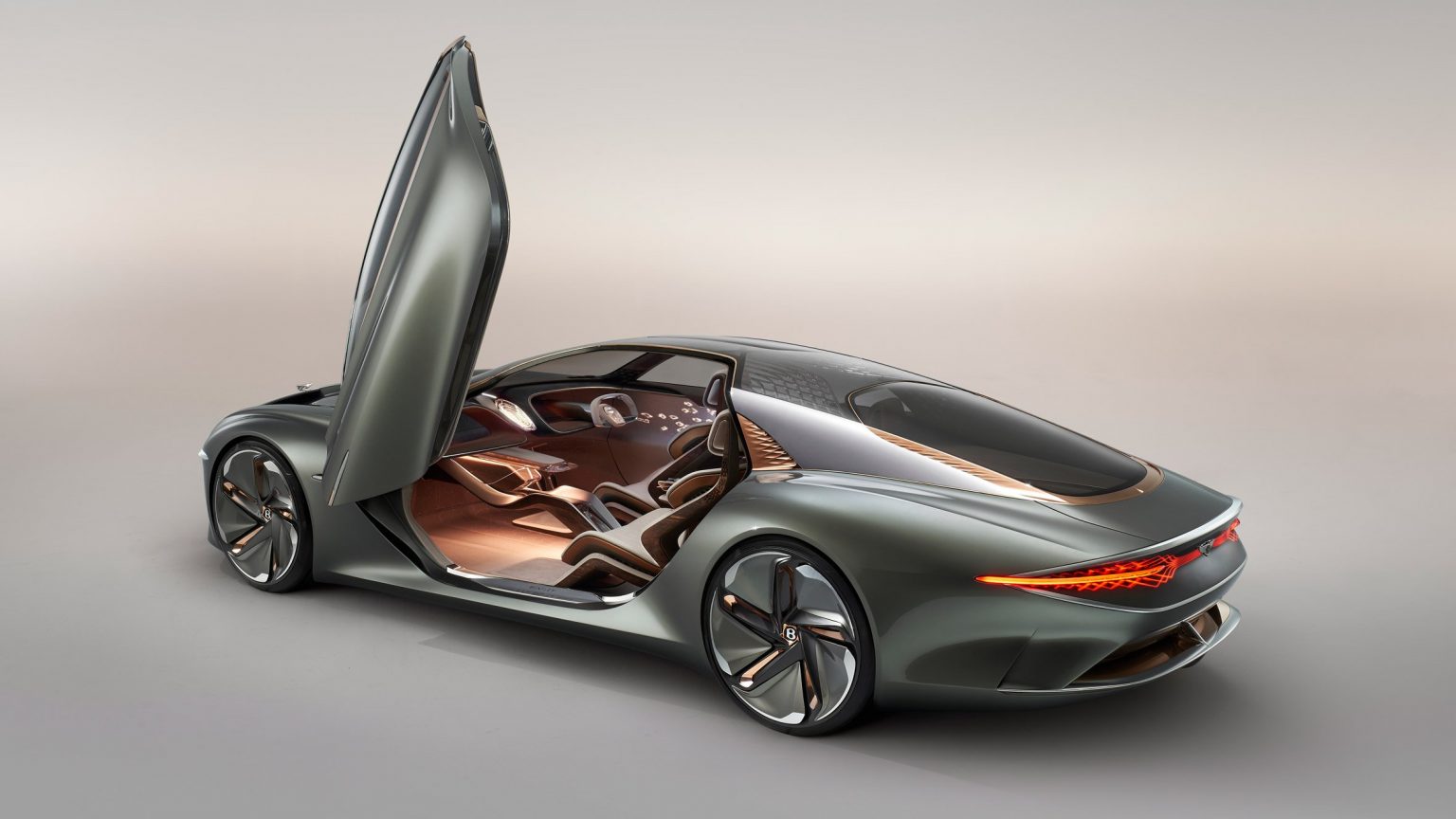 The Cadillac Ciel, designed by Niki Smart at General Motors’ North Hollywood Design Center and first introduced at the 2011 Pebble Beach Concours d’Elegance, is one of those concepts that brand enthusiasts wish had made it to production. In a word, the Ciel is stunning. The rear-wheel-drive Ciel is hybrid powered by a twin-turbo 3.6 liter V6 and lithium-ion batteries. A large, four seat, four door convertible, the elegant Ciel has a wheelbase of 125 inches (3,200mm) and features suicide doors in the back. The interior is liberally fitted with olive wood and rich leather in a complementary color to the olive.

Because of the uniformly positive reaction to the Ciel concept, General Motors seriously considered putting a sedan based on the Ciel into production as a flagship to compete with the S Class Mercedes-Benz and BMW 7 Series but decided, in 2013, that the market for $100,000+ cars didn’t justify their investment.

Though it didn’t go into serial production, the Ciel did make it into the production of the 2015 movie adaptation of the cable TV hit, Entourage. 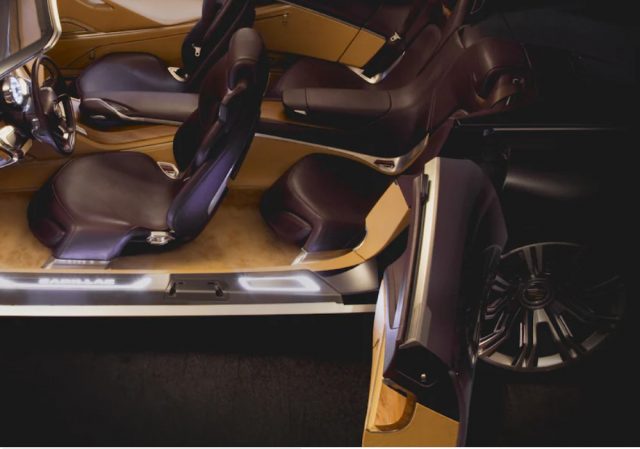 Following up on the Ciel, at the 2013 Concept Lawn Cadillac revealed the Elmiraj, another Niki Smart design that expresses the styling language of the Ciel in two-door, coupe form, though in earlier times it might have been called a pillarless hardtop, a body style last seen out of Detroit in the late 1970s. A fullsize, rear-wheel-drive luxury coupe, the 205 inch long Elmiraj seats four and is powered by a twin-turbo 4.5 liter V8 delivering an estimated 500 hp. Like the Ciel, it was thought to be under consideration for production, as it was based on the then upcoming Omega production platform, but again Cadillac fans were disappointed by GM.

The idea behind Infiniti’s Prototype 9 concept, first revealed at the 2017 Pebble Beach Concours d’Elegance, was “What if Infiniti had created a race car in the 1940s?” One is tempted to say that for much of the 1940s, Nissan was more interested in producing military vehicles than race cars, but after World War II, there were race tracks in Japan like Tamagawa Speedway where open wheel racecars competed and the first Japanese Grand Prix was staged in 1936 so there was a tradition of open wheel racing in the land of the Rising Sun. The Prototype 9 is an attractive modern take on classic open wheel racers.

Unlike those classic race cars, the Prototype 9 is not powered by racing fuel. It is powered by a prototype electric motor based on the one used in the Leaf EV, and lithium-ion batteries used in Inifiniti hybrids. Apparently, the leaf battery pack would not fit the Prototype 9’s narrow structure. Also unlike vintage racers, the Prototype 9 comes with its own Cat6 ethernet cable to connect the electric drivetrain to diagnostic computers. To keep the vintage look, it appears that the Prototype 9 has finned drums, but those are mere props. Most braking is regenerative but there are also inboard disc brakes.

The Prototype 9 was constructed with a combination of traditional craftmanship and modern technology. The hood was shaped using a seven axis dieless forming machine, while the remaining panels were first cut from flat sheet on a CNC laser cutter, and then formed by hand and welded together by master artisans at Nissan’s Oppama plant, the company’s oldest factory.

The De Tomaso P72 concept had its North American debut at the 2019 Pebble Beach Concours D’Elegance, where it was joined, for the first time in history, with its inspiration, the one-off 1960s De Tomaso P70. The P70 was a collaboration between Alejandro de Tomaso and Carroll Shelby, powered by a Ford V8, with Pete Brock doing the design work on the body. The project ended when Shelby was hired to run Ford’s GT40 race team.

In 2014, the De Thomaso brand was bought by IdealVentures, a Hong Kong based firm that had also purchased Germany’s Gumpert. They started teasing the development of “Project P” and introduced what the company says is a production-ready concept. car at the 2019 Goodwood Festival of speed. A total of 72 examples are planned. Designed by Jowyn Wong of Wyn Design, and Based on the Apollo Inensa Emozione, the grand tourer has a carbon fiber monocoque that is said to be fabricated to the standards of the LMP1 race cars. Wong’s design features exhausts that exit from the top of the rear deck.
The interior features diamond stitched leather upholstery, instruments decorated with polished copper, and an open linkage gear shifter for the P72’s six speed manual transmission.

Power will be supplied by a 5.0 liter Ford Coyote V8 with a Roush roots-type supercharger and DeTomaso claims the P72 will have a top speed of over 220 mph and a 0-60 time in the range of just 2 seconds.

In 2019, Bugatti brought the “most expensive car in the world,” the $18.68 million La Voiture Noire [The Black Car], for it’s American debut to the Pebble Beach concept lawn. Based on the Bugatti Chiron, the one-of-a-kind grand tourer is said to pay homage to the prewar art deco Bugatti Type 57SC Atlantic, orginally designed by Jean Bugatti, the eldest son of Etore Bugatti, the company’s founder. You can’t get more exclusive than one-of-a-kind, and Bugatti referred to it as “automotive haute couture… more like a piece of art,” comparing it to the custom clothing produced by fashion ateliers. The La Voiture Noire is powered by a 1,500, 1,180 lb.ft, version of Bugatti’s W16 engine. It is supposed to have a top speed of 261 mph and a 0-60 time of 2.5 seconds. It could have been even faster but Bugatti wanted something more in character with a touring car. At the time that the La Voiture Noire concept was revealed Bugatti said that fabrication would take about 2 1/2 years and the finished car was revealed this year.

When first introduced, Bugatti was coy about the buyer, saying that they’d only identify them if the buyer came forward. It was rumored that former Volkswagen chairman Ferdinand Piech was the secret buyer. Bugatti was revived under VW’s ownership. Mow that the La Voiture Noire has been finished, though, soccer star Cristiano Ronaldo has come forward as the owner.

The Audi PB18 e-tron was not just revealed at the 2018 Pebble Beach Concours d’Elegance, it was named after the show. That’s what the PB18 stands for, partially. It’s also a reference to Audi’s successful LMP1 Le Mans racer, the Audi R18 e-tron which Audi says inspired the sports car. A high performance electric car that Audi says is powered by lightweight solid state batteries, the PB18 e-tron is fabricated from aluminum, carbon fiber, and multi-material composites to further keep weight down to 1,550 kg (3,417 lbs.).

Designed in Audi’s Malibu, California design studio, the PB18 e-tron is wide, flat, and sleek, borrowing lines from the earlier Audi Aicon concept of 2017. It’s designed to be at home on the track. To accomplish that function, the PB18 e-tron has a unique inner monocoque that slides side to side. When driven solo on the track, the monocoque can be moved so the driver is centered in the car, as in a single seat racer. In normal daily driving, the monocoque is slid to the side, left or right depending on what country you are in, to provide a normal driving position and room for a passenger. That changeable driving position is possible because steering, braking, and acceleration are all done by wire. While other automakers are working on autonomous vehicles, Audi’s internal working name for the project was “Level Zero”, as in no automated driving levels, to accentuate the fact that the PB18 e-tron is a driver’s car.

SSC North America (formerly Shelby SuperCars Inc.) revealed the concept for its Tuatara supercar at the 2011 Pebble Beach Concours d’Elegance, named for a New Zealand reptile that scientists say is the fastest evolving creature on earth. Designed by former Pininfaria stylist Jason Castriota, the concept is powered by a Nelson Racing Engines twin-turbo 6.9 liter V8, capable of producing 1,350 hp (1,750 on E85 fuel), and driving through a seven-speed automated manual transmission. The Tuatara has a claimed top speed of greater than 300 mph. To go that fast, the car has active aerodynamics and cameras instead of drag inducing side mirrors. SSC claims a drag coefficient of 0.279, the lowest in its class. The body is composite, with carbon fiber panels and an aluminum superstructure.

The 2016 Pebble Beach Concours d’Elegance was the occasion of the introduction of the Vision Mercedes-Maybach 6, an electrically powered 2+2 coupé with a 738 hp motor, a top speed of 155 mph (electronically limited), and a 0-60 mph time of less than 4 seconds. The underfloor battery has a capacity of ~80kWh, enough for over 200 miles of range. A large car, the Vision Mercedes-Maybach 6 is 224.4 inches ling and just 52.3 inches tall, riding on 24 inch rims.

The proportions of the car, with an exceptionally long hood, short rear deck, split rear window, and “cab rearward” styling are meant to evoke the aero coupes of the 1930s. The gull-wing doors are a nod to M-B’s legendary 300SL sports cars of the 1950. Daimler has fitted the Vision Mercedes-Maybach 6 with its own version of the Maybach grille to distinguish it from mere Benzes.

Instrumentation is via a heads-up display that uses the full width of the windshield, controlled by the driver and passenger’s hand gestures. You’ll be able to see the Vision Mercedes-Maybach 6 in the upcoming 2022 superhero movie, The Flash, with Batman’s alter-ego industrialist Bruce Wayne at the wheel.

As part of its centennial celebration Bentley brought the EXP 100 GT concept car to the Pebble Beach Concours d’Elegance for its first public viewing. The luxury grand touring car is meant to foresee what “enjoying travel” will be like in 2035. At 5.8 meters long, the EXP 100 GT is even longer than Bentley’s flagship Mulsanne. The keep weight below 4,000 lbs, the concept’s structure is made from carbon fiber and aluminum. To further reduce the weight of the electrically powered EXP 100 GT, Bentley claims to be using solid-state batteries that are said to provide an impressive 435 miles of range and can be recharged with fast chargers to 80% charge in just 15 minutes.

The EXP 100 GT is powered by individual motors at each wheel, allowing advanced dynamic controls like torque vectoring. Together, the four motors put out a jaw dropping 1,100 lb ft of torque, enough to propel the car to 60 mph in under 2.5 seconds. Top speed is a claimed 186 mph.

The electric drivetrain allows for a hood that is less tall than usually found on Bentleys, and access to the car’s interior is provided by two exceptionally long (2 meters) scissor doors that open vertically.

To make the EXP 100 GT more sustainable, the interior is finished in natural, organic vegan leather made from grape skins produced by the wine industry, woolen carpets and cotton embroidery. The center console is fabricated from a piece of 5,000 year-old Fenland oak, salvaged from ancient Cambridgeshire river beds. Not only is the electric drivetrain emissions free, the interior also features an air filtration system that Bentley says will provide, “the cleanest cabin air of any vehicle in history.”

Cars aren’t the only concept vehicles to be found on the Concept Lawn. In 2014, high-end French motorcycle maker Midual used the Pebbe Beach Concours d’Elegance to introduce the Type 1, a “luxury-oriented roadster motorcycle. The Type 1 was the first motorcycle ever to be displayed on the Pebble Beach putting green. It has a novel, longitudinally mounted water cooled flat two cylinder engine that puts out 106 horsepower, a twin-wall aluminum monocoque that incorporates the fuel tank, Brembo brakes, conventional front forks, and a cantilever rear suspension with a swing arm molded from aluminum. The instrument panel on top of the gas tank is trimmed in French Oak and the sides are ornamented with fine leather.

When introduced, the price was announced as $185,000, one of the priciest new motorcycles in the world. The Type 1 is currently under limited series production at the Midual factory in Angers, France.