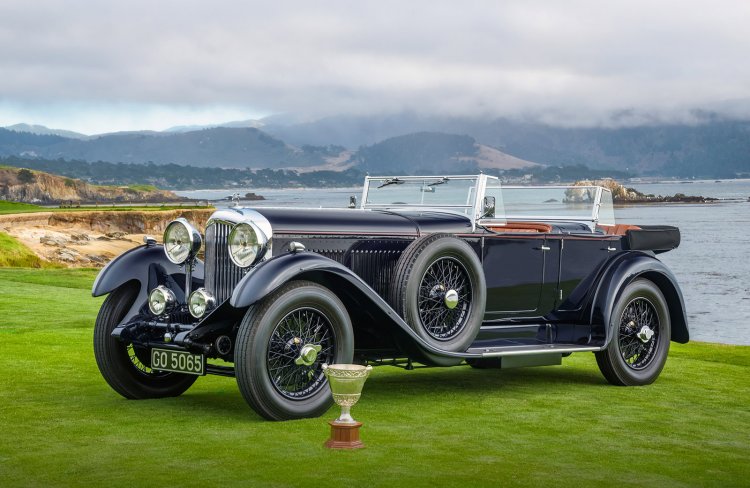 Crowning the Best of Show is a monumental task for the judges.

Picking the winner requires meticulously exploring each car’s history to verify its authenticity and carefully examining even the smallest details to ensure it has been restored and maintained to the highest possible standards. This process ensures that only the best of the best receives the coveted award each year. Here are some of the standout winners in the Concours 71-year history.

1. 1950 Edwards R-26 Roadster (entered by Sterling Edwards in 1950)
Sterling Edwards primarily brought the one-of-a-kind R-26 Roadster he created to Pebble Beach to compete in the Road Races, but he entered it in the Concours d’Elegance at the last minute. Although it wasn’t successful in competition, it finished 14th overall, it made automotive history on the lawn.

Edwards remains the only participant to win the Best of Show award in a car he designed himself.

2. 1913 Rolls-Royce Silver Ghost London to Edinburgh Tourer (entered by Alton H. Walker in 1962)
The oldest car to win Best of Show is this 1913 Rolls-Royce Silver Ghost London to Edinburgh Tourer. It’s one of about 188 units built, but no two examples were exactly the same because Rolls-Royce refused to make its own bodies. It argued that it specialized in manufacturing engines and underpinnings and that coachbuilding was best left to third-party coachbuilders.

3. 1964 Maserati Mistral Coupe (entered by Stanley W. Good Jr. in 1968)
Best of Show in 1968 was surprisingly awarded to what was then a late-model car. The judges picked a 1964 Maserati Mistral, a well-proportioned coupe designed by Pietro Frua and powered by a twin-spark straight-six engine. Their decision was unusual because the Mistral was released in 1963 and was still available new in 1968; it cost about $13,600 (approximately $110,000 in 2021). Maserati built 953 units of the Mistral, which was offered as a coupe and as a roadster, until production ended in 1970.

4. 1927 Packard 343 Eight Murphy Convertible Sedan (entered by Phil Hill in 1977)
American race car driver Phil Hill won his second Best of Show award with this 1927 Packard 343 Eight Murphy Convertible Sedan. Sold new in Santa Monica, California, it’s a prestigious sedan that Hill reportedly purchased from the original owner in 1967 and kept in his collection for over 40 years. He died in 2008, and the 343 was sold at Gooding & Company’s 2009 Pebble Beach auction for $627,000. At the time, it was proudly presented as being the only Murphy-bodied 343 known to exist.

5. 1937 Alfa Romeo 8C 2900B Touring Spider (entered by John Mozart in 1988)
Painstakingly restored in the 1980s, this 8C 2900B Touring Spider earned the distinction of being the first Alfa Romeo to win Best of Show in Pebble Beach. It’s one of the quintessential touring cars of the 1930s thanks in part to a supercharged straight-eight engine, an elegant design, and a lavishly appointed cabin.

6. 1938 Bugatti Type 57SC Atlantic (entered by Ralph Lauren in 1990)
Assigned chassis number 57591, this 1938 Bugatti Type 57SC Atlantic is the last of four examples built, and one of three known to exist in 2021. It was developed by Jean Bugatti using manufacturing and design techniques borrowed from the aviation world in a bid to modernize the prestigious carmaker’s image. Bugatti kept one of the four cars for himself; it’s the one that hasn’t been found. Nicknamed La Voiture Noire (“the black car” in French), it inspired the Chiron-based one-off Bugatti unveiled in 2019.

7. 1930 Mercedes-Benz SS Erdmann & Rossi Roadster (entered by Arturo and Deborah Keller in 2001)
It takes a well-trained eye to tell that this supercharged 1930 Mercedes-Benz SS started life as a race car. Wearing chassis number 36348, it competed in a number of motorsport events, with drivers like Rudolf Caracciola, during the early 1930s. While race cars were often destroyed or cannibalized for parts in that era, this SS received a new lease on life in 1934 when a private owner commissioned Berlin-based coachbuilder Erdmann & Rossi to build a gorgeous open-top body for it.

8. 1937 Delage D8-120 S Pourtout Aéro Coupé (entered by Sam and Emily Mann in 2005)
Stunningly aerodynamic, this Pourtout-bodied 1937 Delage D8-120 S Aéro Coupé is a one-off prototype commissioned by company founder Louis Delage for the 1937 Paris auto show. His aim was to illustrate the wide panoply of bodies Delage’s D8 chassis could underpin. Powered by a 4.7-liter V8, the coupe stood out with headlights partially integrated into the front fenders, a curved windshield, and covered rear wheels, among other futuristic styling cues. Delage later used the Aéro Coupé as his personal car.

9. 1935 Duesenberg SJ Speedster (entered by Harry Yeaggy in 2007)
Nicknamed the Mormon Meteor, this 1935 Duesenberg SJ Speedster is a one-off designed by Ab Jenkins to set speed records. Combining a supercharged, 6.9-liter straight-eight engine tuned to develop about 400 horsepower and a streamlined body allowed Jenkins to average 135.58 mph for 24 hours on Utah’s Bonneville Salt Flats. His record made national headlines. The Mormon Meteor was later modified for street use (which required adding headlights, among other parts). It was sold for $4.45 million at the 2004 Pebble Beach Concours d’Elegance and returned to its race configuration by Harry Yeaggy.

10. 1931 Bentley 8 Litre Gurney Nutting Sports Tourer (entered by Michael Kadoorie in 2019)
The 2019 edition of the Concours d’Elegance celebrated Bentley’s 100th anniversary, so few were surprised to see one of its cars win Best of Show. The award-winning model is likely the last of its kind; two Gurney Nutting Sports Tourer bodies were built for Bentley’s short-wheelbase 8 Litre chassis but most historians believe that one of the two was actually used on a Rolls-Royce Phantom chassis.