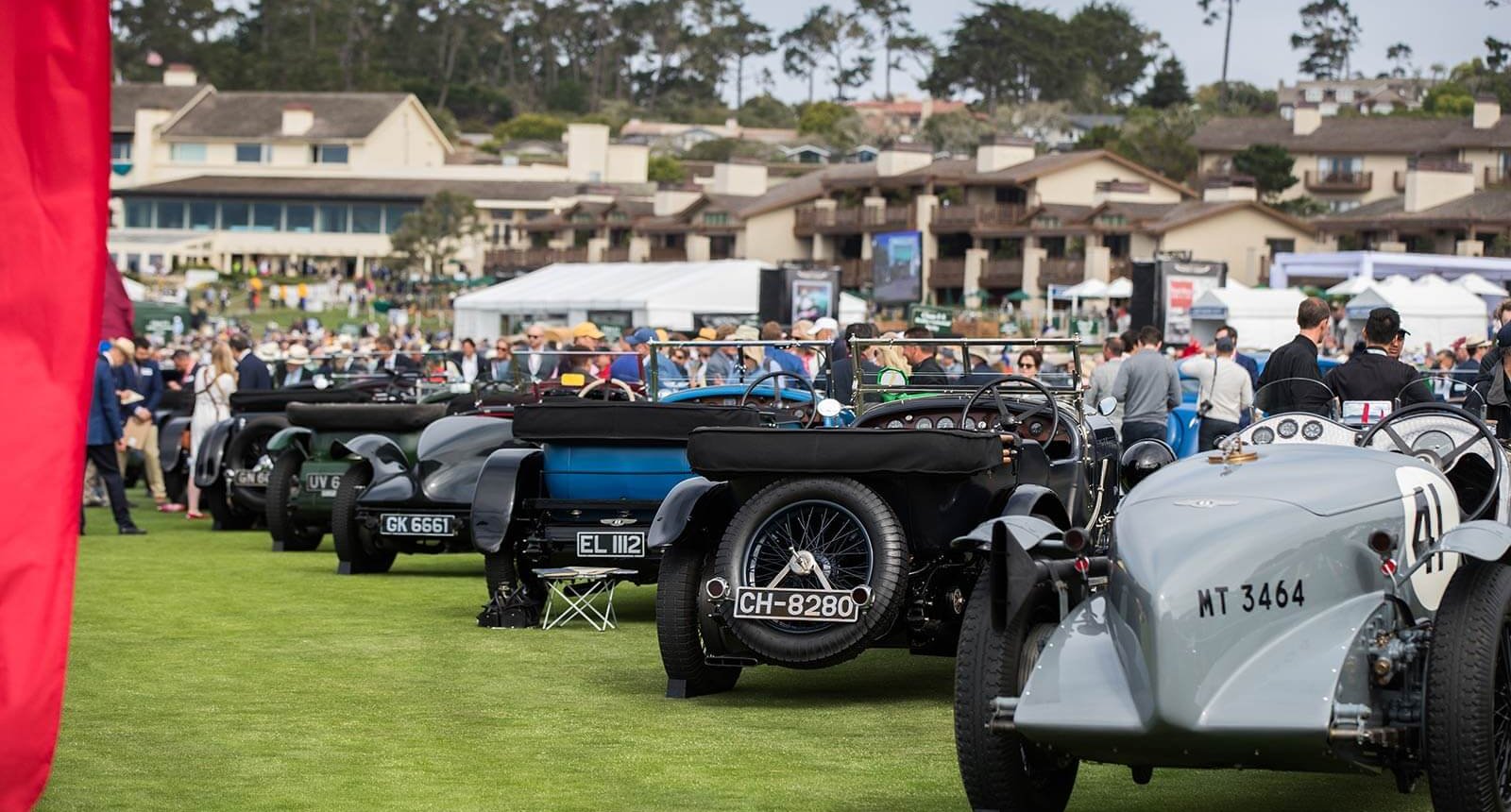 There’s a lot that even casual observers of major events know about the Pebble Beach Concours d’Elegance: It’s the premier vintage car event in the country. It’s held on the 18th green of the Pebble Beach Golf Links. Jay Leno makes an appearance every year.

On the other hand, however, there is a lot about the Concours d’Elegance that reveals itself only after digging through data, researching trivia, and running some spreadsheet formulas. If you’re a student of the Concours, you might be familiar with some of these items, but we’re hoping that one or two come as a surprise.

1. The first Pebble Beach Concours d’Elegance was held on a practice tee and driving range at the Del Monte Lodge, now known as the Pebble Beach Lodge.

2. Everybody knows that the 2020 event was canceled due to COVID-19 restrictions. The event has only been canceled once before, in 1960. There’s conflicting information about why. Some sources say “scheduling conflicts,” but those all seem to be looking at the Wikipedia entry. Others say it was inclement weather, which was what forced the Concours d’Elegance to the old start/finish line of the road race in both 1963 and 1965.

3. The very first Pebble Beach Best of Show winner was San Francisco’s Sterling Edwards, who won with one of eight cars he built himself, the dashing R-26 Special Sport Roadster. RM Auctions sold that car in 2011 in rough condition for $143,750.

6. If you have an American car and want to win Pebble Beach, you’d better own a Packard. The classic American manufacturer has won four times. The only Big Three manufacturer to win has been Chrysler, with a 1931 CG Imperial LeBaron Dual Cowl Phaeton in 1979.

7. The first Full Classic to win at Pebble Beach was in 1951, when Phil Hill’s 1931 Pierce-Arrow LeBaron Town Car Cabriolet won.

8. Outside of the new new cars to win the first four years, and the two-year-old Jaguar that won in 1954, the next most modern car to win was Stanley Good, Jr.’s then four-year-old Maserati Mistral Coupe in 1968.

9. The next time a post-war car would win Pebble Beach was in 2014, when former Microsoft president, COO and Chairman Jon Shirley won with a 1954 Ferrari 375 MM Scaglietti Coupe.

10. The oldest car to ever win Best of Show was in 2015, when Jim Patterson’s then 91-year-old 1924 Isotta Fraschini Tipo 8A Worblaufen Cabriolet took top honors.

11. A small handful of people have brought cars that have won more than once, but nobody has brought more Best of Show winners than J.B. Nethercutt (standing). He was the founder of a cosmetics empire with his aunt, Merle Norman, the brand’s namesake.

12. J.B. Nethercutt’s next-to-last win arguably represents the least expensive purchase to ever win Best of Show. In 1958, he won with a 1930 DuPont Model G Merrimac Town Car, which he found sitting outside a gast station for $500. The car’s restoration consumed $65,000 — approximately $650,000 in today’s money.

13. Nethercutt and his wife Dorothy drove that DuPont 325 miles from Santa Monica to Pebble Beach prior to winning.

14. 1961 saw Scott Newhall win Best Of Show with a 1930 Packard 740 Custom Eight Roadster. Newhall was the publisher of the San Francisco Chronicle, and one of his many claims to fame is that he’d do anything to beat out the Hearst papers, including running headlines like “New Hairy Potato Oozes Goo,” and columns like “Dear Abby,” the first time the advice section would run in a major newspaper prior to syndication.

15. Collectible posters have been a part of Pebble Beach Concours d’Elegance history since 1958. The first poster was a photograph of the field the year before, taken by Julian Graham from the balcony of the Del Monte Lodge.

17. Dr. Milton Roth won the Pebble Beach Concours in 1956, with that 1930 Bugatti Type 37 Grand Prix we mentioned as being the first of the marque to win. When Roth died just a few years later in 1963, he bequeathed his car collection — including a half-scale, battery-powered Bugatti that was said to be the property of Benito Mussolini — to the nurse who cared for him at the end of his life.

18. Milton Walker’s 1913 Rolls-Royce Silver Ghost London to Edinburgh Tourer won Best of Show in 1962. It is the only pre-WWI vehicle to ever win Best of Show. The next oldest vehicle to win was from 1922.

19. Pebble Beach doesn’t usually go in for cars in popular cinema. You won’t see the Bandit’s Trans Am on the lawn, for example. In 2004, however, one movie car did show up: The 1931 Rolls-Royce Barker Sedanca De Ville that appeared in the 1964 film The Yellow Rolls-Royce, starring Ingrid Bergman and Rex Harrison.

21. Pebble Beach winners usually stick pretty close to the plot: French cars, pre-WWII. One rarity was the 1928 Minerva AF Hibbard & Darrin Ostruk Berline Transformable that won in 1987. It’s the only Belgian car to ever win.

22. Since 2001, the Concours has featured a Preservation class, which is a wild departure from the polished, immaculately restored cars that typically win Best of Show.

24. The second Pebble Beach Concours d’Elegance occurred about six months after the first, in the spring of 1951.

25. In 1961, the organizers began charging an entry fee for the first time: $1, in the form of a donation to the Monterey Peninsula Hospital Auxiliary. Ever since, entry fees have gone to support charities including scholarships for Phil Hill Scholars, awarded for 2020-2021 students to Nate McLaughlin of Ticonderoga, New York, a senior at McPherson College.