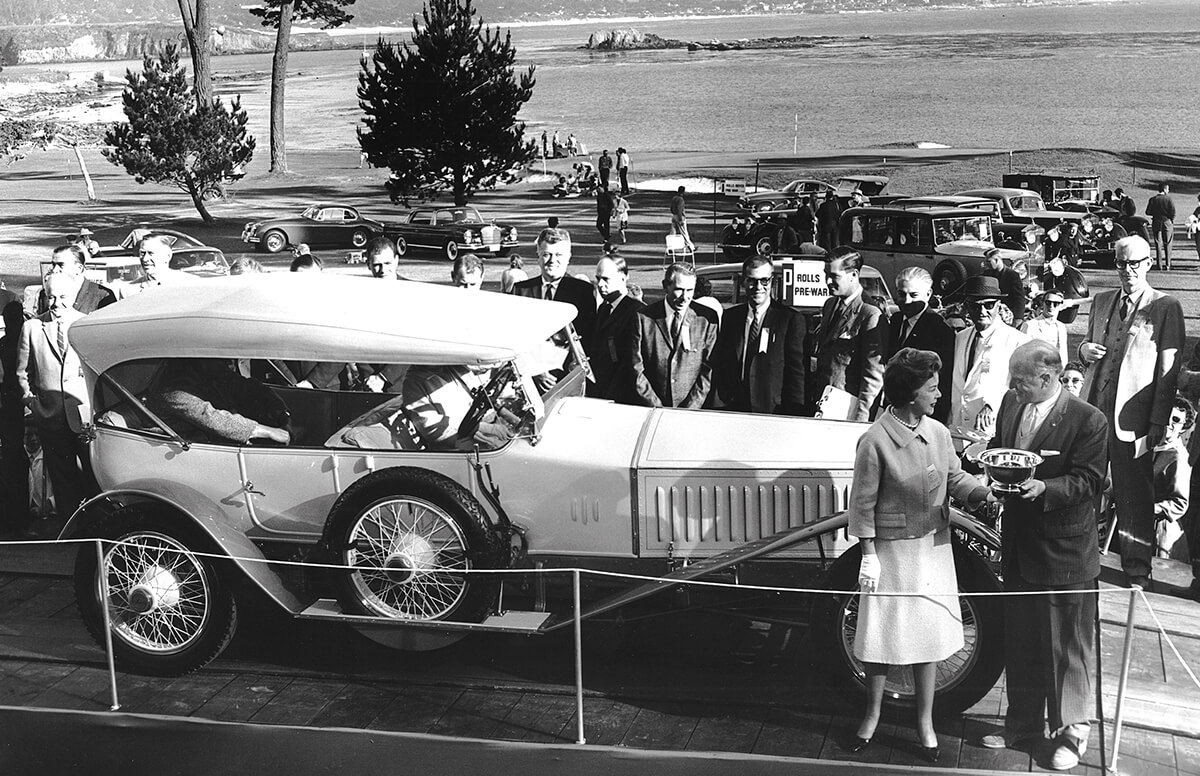 The celebrated Concours d’Elegance has been held in Pebble Beach since 1950, but it wasn’t always the main attraction. The first edition was organized almost as an afterthought to complement the Pebble Beach Road Races. It outlived that competition, and has grown significantly over the past 71 years.

Concours d’Elegance means, unsurprisingly, “elegance contest” in French. In the early 20th century, when cars tended to be hand-made luxury items rather than mass-produced commodities, these events gave motorists the opportunity to showcase the one-off models they commissioned from coachbuilders. Gatherings were normally held outdoors, parades were a central part of the program, and judges selected a winner at the end of each show. Concours gradually disappeared after World War II, partly because international car shows (like the ones held in Geneva and Paris) became the preferred venue to display new models.

Pebble Beach organized its first Concours d’Elegance in 1950 to add an attraction to the road race that was also held for the first time that year. The basic idea was that gathering around cars parked in a scenic location (rather than watching them drive flat-out through a forest) would give attendees an opportunity to socialize. That year, judges picked a 1950 Edwards R-26 Special Sport Roadster as the winner from a field of about 30 cars. Entered by Sterling Edwards, the man who first approached the owner of Del Monte Properties with the idea of organizing a race in Pebble Beach, the roadster also won its class in an early race, with Phil Hill taking first overall for the event in a Jaguar XK120.

In a way, the Pebble Beach Concours d’Elegance initially picked up where European events left off. Early show winners were new cars, like a 1951 Jaguar Mark VII Saloon in 1951 and a 1953 Austin Healey 100 in 1953. It wasn’t until 1955, when Phil Hill’s 1931 Pierce-Arrow won, that the event began shifting its focus to older cars. The following year, judges awarded first place to a 1930 Bugatti Type 37.

For many years the Concours d’Elegance and the Road Races were held concurrently. Both events drew a growing number of spectators, but the latter was deemed too dangerous after hot-rodder, sports car dealer, and racer Ernie McAfee hit a tree and died. While racing later moved to the Laguna Seca track, which was built in 1957, Pebble Beach continued hosting the Concours d’Elegance.

Promotional posters were first printed in 1950, and they’ve been made for every edition of the event. As attendance grew during the 1960s, the Pebble Beach Concours d’Elegance evolved into one of the premier events for classic car owners and enthusiasts in North America. Participants traveled from all over the United States (and, increasingly, Europe) to celebrate the art of the automobile.

One of the most significant additions to the Concours-related festivities is the Tour d’Elegance, which was first held in 1998. It takes participants on a roughly 70-mile roundtrip from Portola Road in Pebble Beach to Big Sur on some of the most scenic and picturesque roads in California, including Highway One. It’s a test of reliability for the cars, and it’s a unique opportunity for enthusiasts to see and hear the stars of the Concours in motion.

Dawn Patrol is another major attraction added to the Concours program around the turn of the 21st century. It traces its roots to the early 1990s, when noted collector Don Williams began greeting the cars as they arrived on the lawn. It rose to prominence about a decade later when McKeel Hagerty started sponsoring it, giving out coffee, donuts, and the all-important hats to early birds. Fast forward to 2021, and Dawn Patrol manages to lure thousands of spectators out of bed before sunrise.

Pebble Beach has hosted the Concours d’Elegance annually since 1950 with two exceptions. It wasn’t held in 1960 due to scheduling conflicts, and the 2020 edition was canceled in the midst of the global coronavirus pandemic. It’s back for 2021: The Tour is taking place on August 12, and the Concours is scheduled for Sunday, August 15. As always, confetti and champagne will help crown the new winner.

Bugatti with nine and Mercedes-Benz with eight have achieved the most Concours wins. Alfa Romeo’s cars have won three times, Rolls-Royce models have received five awards, and the judges gave top honors to a Duesenberg six times.