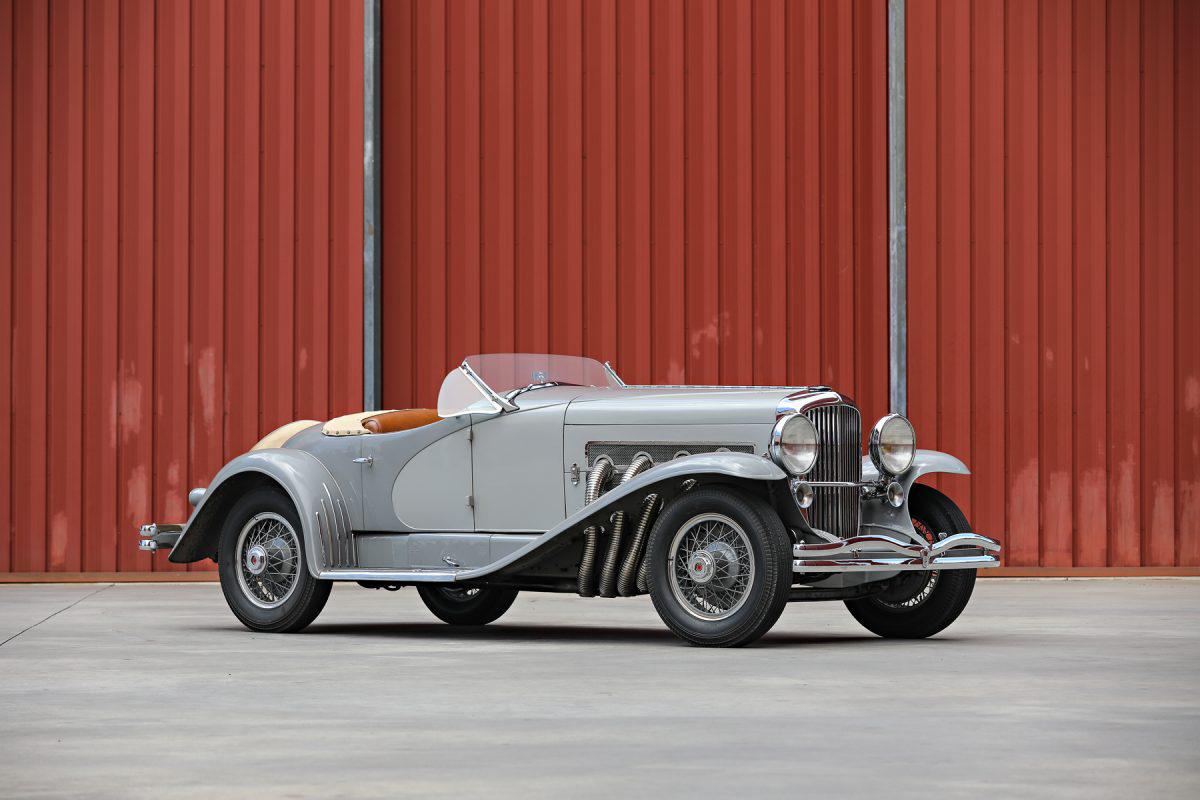 Considered to be the ultimate Model J Duesenberg, this car has both provenance and rarity, resulting in a record price for an American automobile. One of just two SSJ models built, it has a unique short-wheelbase chassis and a supercharged engine with twin carburetors. It was originally delivered to movie star Gary Cooper and it has had just two owners since 1949, both of them prominent collectors, Briggs Cunningham and Miles Collier. It is in original, unrestored condition, with the original engine, chassis, and LaGrande bodywork that was designed by J. Herbert Newport, Duesenberg’s chief designer.

The majority of cars on this list are Ferrari 250 models, and this is one of just 37 short wheelbase California Spiders with covered headlights. Originally Blu Metallizzato over red leather interior, the car is now red over black. Certified and documented.

This matching numbers, coachbuilt car has the provenance of two legendary designers. Before opening ItalDesign, Giorgetto Giugiaro worked for Bertone, which is where he penned this tribute to Ferrari’s famous “sharknose” F1 cars of the early 1960s. This specific vehicle was also Nuccio Bertone’s personal car and it was displayed at both the Geneva and Turin auto shows. The centerpiece of collector Lorenzo Zambrano’s collection for three decades, it has won Best of Show ribbons at major international concours. Complete with books, tooks, and certification.

The 250 Testa Rossa is one of those cars that actually deserves the term iconic and this pontoon fendered red head was the very first 250 TR that was made. In addition, this Scaglietti bodied roadster was a Scuderia Ferrari team race car with an eight year history of being driven by some of motorsport’s greatest drivers on the sport’s premier venues. Matching numbers and a documented history from new. The restoration by Dennison International has won numerous awards including First in Class at the 2006 Pebble Beach Concours d’Elegance. Painted in the livery of Ferrari’s North American Racing Team (NART) used at the 1958 Le Mans race, the car came with extensive documentation, certification, a race engine and spare parts.

Another one of just 37 short wheelbase California Spiders with covered headlights, but even though it came with the “rare and desirable” hardtop, and has a “distinguished show car pedigree and celebrity provenance,” it sold for $1.5 million less the other SWB California Spiders on this list that sold a year later. It’s still good for sixth place.

This matching numbers, Scaglietti bodied berlinetta is the youngest car on the list, having been made just 45 years ago. It is one of just a dozen GTB/C models built and considered the ultimate development of the single cam Ferrari Berlinetta. Although it raced for four years in Italy, taking class and overall wins, it still has it’s original chassis, body, and engine. It comes with books, literature, an extensive and documented history, and it even has the original tool roll.

A half century after it thundered through race courses around the world, the all-conquering Porsche 917 is truly one of the world’s great racing cars. This particular 917 likely made this list for a couple of reasons. To begin with, its provenance has been documented since new and includes ownership by Porsche racing legend Jo Siffert. Perhaps more important when it comes to high auction prices, this 917K is associated with the magic words “Steve McQueen.” This car was used extensively in the filming of McQueen’s movie, Le Mans. It’s also finished in the classic light blue and orange Gulf Oil livery.

One of the first racing competition short wheelbase Berlinettas built by Ferrari, this 250 GT has a significant racing history including a 7th overall in the 1960 Le Mans 24 hour race. Despite its racing history, it still has it’s original aluminum bodywork and numbers matching engine and transmission.

The namesake to the modern Alfa 8C is the oldest car on the list and one of only two prewar cars. It has a numbers matching engine with coachwork by Brianza. This particular 8C was documented in The Legendary 2.3 by Simon Moore and is an accurate example of a late production Series III Monza, considered to be the “ultimate” factory built 2300. It had a long and successful racing career, having been owned and raced by some of Italy’s most prominent drivers between 1933 and 1950, including winning the 1947 Sport Nazionale Championship with Renato Balestrero at the wheel. Seventeen years is remarkable span for a racecar to remain competitive. The Alfa Romeo was sold with additional original components and spare parts.