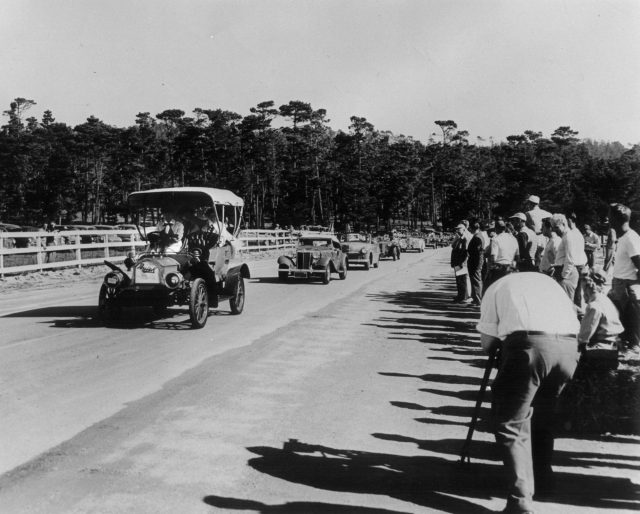 The Pebble Beach Concours d’Elegance traces its origins to 17th century Paris, where wealthy French aristocrats would parade their elaborate horse-drawn carriages in the city’s parks on holidays and summer weekends. Whether those were formal events or just efforts to establish social standing, those parades spawned the term “concours d’elegance” which means a competition of elegance. Over time, the carriages lost their horses, but competition and social standing are timeless human traits, so the practice was transferred to automobiles.

The show at the Pebble Beach Golf Links is generally regarded as the most prestigious car show in America and one of the preeminent concours in the world. Today, though much of the automotive world turns its focus to the Monterey Peninsula in late August, the first Pebble Beach Concours d’Elegance in 1950 was not so important. It wasn’t even important enough to be featured on the posters for the marquee event in Pebble Beach that year, the inagural Pebble Beach Road Races, and the man most responsible for establishing the Concours entered it on a whim at the last minute.

That’s because Sterling Edwards was more interested in racing cars than showing them. Edwards, of San Francisco, had inherited his family’s steel-cable manufacturing company so he had the means to pursue that interest.

One of Edwards’ close friends was Jack Morse, the president of Del Monte Properties. Morse was the son of Samuel Finley Brown Morse, a distant cousin of the Samuel Morse who invented the telegraph. The senior Morse attended Yale, where he captained the 1906 national championship football team, and graduated in 1907. Today we’d say that Morse had connections. A member of Yale’s elite Skull and Bones secret society, a classmate introduced him to his uncle, William Crocker, who ran the Pacific Improvement Company in California. Crocker’s father was the founder of the Central Pacific Railroad and an associate of Leland Stanford. The railroad had extensive real estate holdings, including thousands of acres on the Monterey Peninsula and Pebble Beach’s Hotel Del Monte. As it was not very profitable for the railroad, the real estate was spun off into the Pacific Improvement Company.

In 1914, Samuel Morse was hired to manage the Pacific Improvement Company. Two years later he persuaded PIC’s board of directors to build a golf course, to spur interest in developing their real estate holdings on the Peninsula. In February 1919, the Pebble Beach Golf Links and adjacent Del Monte Lodge were completed. Five days later Morse bought the 18,000 acre Del Monte Unit from PIC and incorporated the Del Monte Properties Company, the corporate antecedent to today’s Pebble Beach Company.

The Del Monte Lodge in the 1940s[/caption]Edwards wanted to race, and sell, sports cars of his own design, cars that could be driven daily but also raced. Towards that end he had the Edwards R-26 Special fabricated in 1949. The sources disagree on the construction of the R-26. While some say it had a shortened Ford chassis and a Lincoln engine with a fiberglass body, it more likely had a custom tubular steel frame, a flathead Ford motor, and a hand-formed aluminum body, as that version of the story is actually documented. Engineer Norman Timbs designed the tube frame and powered it with a 125hp, 153 cubic inch flathead Ford V8, modified for racing by Eddie Meyer Engineering. It had independent suspension front and back, a braking system borrowed from a Beechcraft Bonanza aircraft, and a body fabricated by race car builders Emil Diedt and Lujie Lesovsky. The four seat R-26 had a removeable metal hard top roof, leather upholstery, and a windshield that could be also be removed and replaced with racing screens. The car made the cover of Road & Track in December of 1949. Edwards had a car, now he needed a place to race it. Most major American road races were held on the east coast, like at Watkins Glen.

The original 1.8 mile race course through the Del Monte Forest on public roads.[/caption]Three decades after Sam Morse founded the firm, his son, John B. (AKA Jack) was running Del Monte Properties and trying to attract tourists to stay at the Lodge and sell a few residential lots. Sterling Edwards was a member of the Sports Car Club of America’s San Francisco Region and, as mentioned, he was a good friend of Jack Morse so he pitched him on holding a race on the company’s property. Road racing was becoming a popular sport, bolstered by war veterans driving MGs, Jaguars and other sporting machines they discovered while in Europe. It was a win-win situation. The race would generate publicity for the Lodge and real estate, and the SCCA would have a place to stage its first major races on the west coast. Sports car dealer Kjell Qvale was named chairman of the race committee. The first Pebble Beach Road Races were scheduled for November 1950. To give racers and attendees a chance to socialize and class up the race, organizers decided to add a concours d’elegance to the schedule.

The records for that first Pebble Beach Concours don’t show that Edwards actually entered the event. He was primarily interested in racing, thinking that would promote his automotive venture. Apparently at the last minute he decided that putting the R-26 in the car show might also help the venture. It didn’t take much to enter the Concours, as the cars were being judged just a few blocks from the start-finish line of the race, which was held on public roads. You can still drive the original, tree-lined course in the Del Monte Forest today.

With what must have been a pleasant surprise to Edwards, his car won Best of Show in the Concours, beating out 30 other cars, mostly late model sports cars. The Concours wouldn’t start focusing on what were then called “classic” cars until the mid 1950s.

Edwards wasn’t quite as successful on the race track, at least in the featured event, which was won by Phil Hill, who later won a Formula One world championship. Edwards finished 14th in the feature race but he did win his class race and was awarded the first Del Monte Trophy.

The last Pebble Beach Road Races were held in 1956, with the feature race that year being won by none other than Carroll Shelby. With so many trees nearby, racing on public roads was quite dangerous and the ’56 race was marred by the fatal crash of Ernie McAfee. This was just a year after a driver and 83 spectators were killed when a car went into the stands at Le Mans and racing on public roads was getting a bad reputation. A dedicated race track was constructed in nearby Laguna Seca to continue west coast road racing, but the real Pebble Beach Road Races ended in 1956.

Sterling Edwards never succeeded in the car making business. He built a couple of purpose-built racers and then a short run of five more luxurious sports cars. They were attractive and technically advanced but the venture ended.