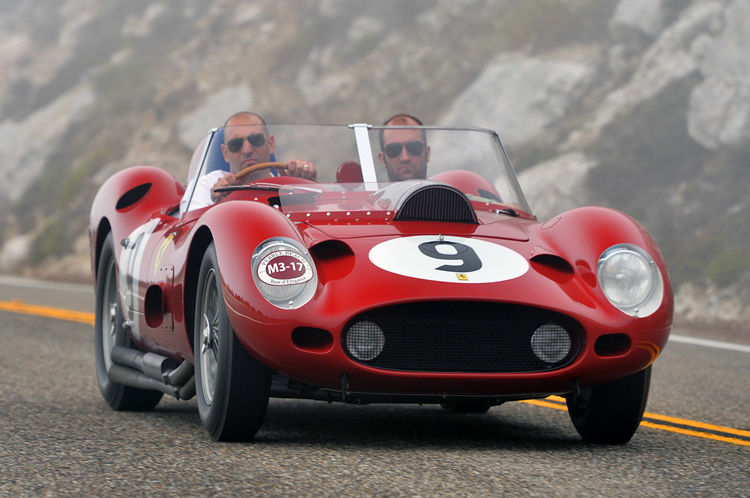 Colin Feichtmeir, a Chief Class Judge and member of the Selection Committee at what he calls “the greatest car show on the planet”, the Pebble Beach Concours d’Elegance, is truly a lifelong classic car enthusiast. Born and raised in Mountain View, California, he got the bug for classic automobiles as a two year old, when his grandfather put him on his lap and took him for a spin in a Ford Model T speedster. He unsuccessfully tried to buy a Model T engine when he was 11 and he became a liftime member of the Horseless Carriage Club of America at the age of 14. The interest was natural as Feichtmeir’s father and uncle had an extensive collection of over 100 pre-1925 antique American cars and post-war sports cars and their own shop to restore and maintain them.

It’s not surprising, considering his early history with old Fords, that the first vintage car that he bought was a Model T. It had been sitting in a field in San Jose and had a decrepit cut-down speedster body that was falling apart. A friend who worked for his uncle pulled it out of the field and three days later took it on a 200 mile endurance tour. Colin and his younger brother had to pool their resources to buy it for $2,500 because neither had enough in their checking accounts to cover the price individually. His uncle’s shop restored it as a period racer. Feichtmeir still owns the T and has put thousands of miles on it, driving it regularly.

While Colin’s automotive interests are generally broad, including anything pre-war along with post-war European sports cars, his main passion are cars from the automotive era’s earliest days. He says it was a time of great experimentation, not all of which succeeded, and there are a lot of nuances to those classic automobiles.

He’s been on the Selection Committee since 2010, specializing in early cars. Feichtmeir takes his role on the committee and his role as a judge very seriously, contantly trying to educate himself about the cars. He says that it’s important to verify things and not just rely on what people generally think. Colin says that it’s a challenge to be as objective as he can. Interestingly, he says it’s a particular disadvantage if he owns an example of the car he is judging, as he has his own opinions. Feictmeir feels deeply for the competitors. For some who lose, they feel like their children have been judged. He points out that the show has many cars that he loves and would personally buy and drive but do not necessarily have the authenticity that the winner of a show of Pebble Beach’s caliber demands.

Feichtmeir has great respect for the car owners who show their cars and he spends a good deal of the 10 to 15 minutes allocated for each car to be judged listening to the owner’s presentation and answers to the judges’ questions. He says their research and preparation are impressive and every year he is “blown away” by the knowledge of the car owners. If he questions a particular item on a car, the owner will likely be quick to show him a period photo or an image from an early concours to prove their case.

Colin also has great respect for his fellow judges, saying there is a lot of consultation between judges, particularly when placing the number two, three, and four cars in the class.

He first realized that the hobby had some intellectual depth when he accompanied his uncle on a vintage car tour in Oregon, after he graduated from Boston College with a Bachelor of Science degree. At one of the tour stops, someone who Feichtmeir describes as “a major collector,” someone he respected greatly, came up to him and started asking him questions, leading to a serious discussion. He likes to joke that a lot of his car friends are his parents’ age.

Feichtmeir is one of those collectors who doesn’t like to sell his cars but interestingly, his ‘one that got away’ story isn’t from the classic era. It’s a 1972 Toyota FJ40 Landcruiser that he drove in high school, borrowing $2,500 from his uncle to buy it. He doesn’t recall why but when he moved to Boston for college he sold it. He does recall making a small profit on the sale, which he had to split with his uncle. Not long ago he tried tracking it down, even going door-to-door handing out fliers near its last registered address.

One car that he’s definitely not selling is his brass era Pope-Hartford. About nine years ago he really wanted an early brass car. He’d search websites like Flickr, looking for photos of classic automobiles, only to be disappointed that brands like Stutz and Stanley were beyond his means. Then, searching for more obscure brands he spotted a photo of a Pope-Hartford sitting in a barn, a barn that he recognized from a classic car tour he took as a teen in Marin county. He tracked down the poster of that image, who turned out to be a used car dealer. The dealer said that he’d originally been approached by the family who owned it about selling it for them but nothing had ever come of that. Feicthmeir kept bugging the dealer and after about 10 calls to the family they eventually said they again wanted to sell it. When the dealer said he’d take new photos, Feicthmeir suggested instead that he go with him to check out the car. He says it was in poor shape, but when the owner offerred a price, Feichtmeir didn’t dicker, surprising the owner and dealer by saying, “I’ll take it.” He had the car worked on to get it running and he uses it “a lot,” calling it “really special.

When giving advice to people new to the hobby, Feichtmeir stresses investigating the cars you are interested and educating yourself about them. Decide what kind of car you want, find a car that really speaks to you and do your own research. As far as collectibility is concerned Feicthmeir says that if people wanted it back then, they’ll likely still want it today. “If it was good when it was new, people will want it now.”

Feichtmeir and his wife are raising their family in northern California, where he works in commercial real estate.