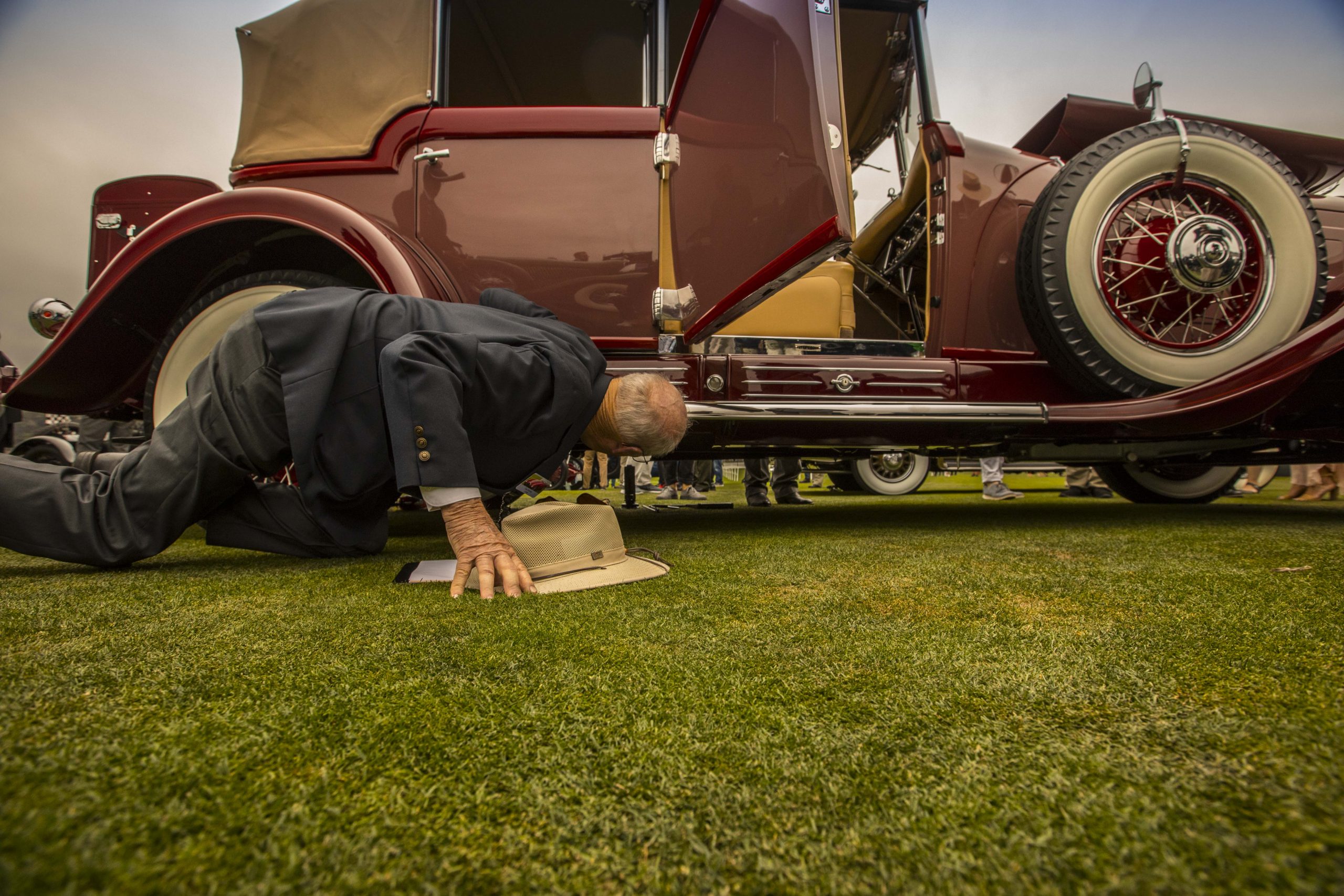 In 2012, after 50 straight years of attending the event and acting as a class judge, retired real estate broker Chris Bock of Nevada City, California, became the Chief Judge at the Pebble Beach Concours d’Elegance. In 1963, Bock attended his very first Pebble Beach Concours d’Elegance, and a decade later he’d been appointed chief class judge in the American Classics class.

It was Bock’s life-long interest in Packards that helped him find his way to Pebble Beach, a passion that began very early in life. “I was a crossing guard in my elementary school, and the lady on the corner where I was shepherding kids across the street had a 1941 Packard limousine,” he told – Cars Yeah host Mark Greene, “she went through this formal process of having the chaueffer park it in front of the walk, and she would come out and do her grand exit. It was the first time I keyed in on the fact that there were cars that were more than basic transportation. That started a life-long pursuit and passion and hobby, and has absorbed a lot of my time ever since.”

Bock noted that his favorite part of the hobby is discovery. “I love chasing leads and finding cars,” he told Greene. “I was fortunate enough to get a lead on a hidden car in San Francisco and was able to buy it. That was an incredible moment. I love to this day chasing down obscure leads and opening a door and there’s the car.”

That car was a 1931 Packard sedan, which is one of the many cars that Bock also regretted selling. “It was a one owner car, last on the road for the 1952 Republican convention,” he told the podcast. “They retired it and so for 11 years it sat in a garage in Pacific Heights.” He noted that it’s under good stewardship today with a sympathetic owner who’s interested in preserving its originality. The car was last displayed on the show field in the Preservation Class in 2018.

Along with being Chief Judge at the Pebble Beach Concours, Bock is also on the selection committee, and he says that’s really the beginning of the judging process. In a video interview with the organizers at the Pebble Beach Concours d’Elegance, Bock said “We want to make sure that the cars are what they present themselves to be and that they’re authentic and original.” Bock notes that the selection process often consumes hours of research where the selection committed pores over the supporting documents provided by the owner or restorer. All of that material is then entered posted on a a password-protected website that the judges all have access to.”

While spectators, auto industry executives and entertainment figures walk the 18th green at Pebble Beach, the pressure is on. For the car owners, the reason for the stress is obvious. They’ve put the work in not only to be invited to the Pebble Beach Concours d’Elegance, but to get the car on the show field, often transporting cars around the world for a total of, as class judge Ken Gross mentioned in an interview, can be as short as 15 to 20 minutes in front of the judges. “You’ve got 20 to 30 minutes maximum, with an owner and a car, and you have to do an awful lot in that short period of time,” Bock said.

With that much weighing on their shoulders, Bock noted that the judge’s first responsibility is to help take the edge off and get the owners to relax. “The owners are petrified,” Bock said, with the owners asking themselves “Is it going to start?” or “Is the windshield wiper going to work?” Bock notes that “It’s a time of tension.”

What happens on the 18th green is a technical judging. “The judging is quite technical. The cars are evaluated in their classes. There are typically eight, maybe nine cars in the class,” Bock noted. “Then we assemble 100 to 105 technical judges from around the world who have expertise in various marques and eras and they are charged with evaluating a particular class of cars. They have the hard job of picking first, second and third, which is often a tough process.” There are honorary judges who are part of the process, but not judging things like engine bays and chassis.

The process is tough on the judges, because of the stakes at hand. “You can’t be right 100% of the time,” Bock says. “Unfortunately we all make mistakes and I trust that I’ve learned from those through the years. We never really know everything about a subject, and we can always be students. You can never stop learning.”

Even regular production cars can have variations if the manufacturer changed a supplier midway through a model year. “When you talk about low production cars,” Bock says, which all of these cars are, “manufacturers constantly changed things, so to say ‘This particular car had to be done in this fashion,’ that often wasn’t the case. Different suppliers came up with different components and you’ve got to be open minded. You have to listen to the owner.”

The cars that pass technical judging and win first place in their class are led to the Winner’s Circle. “And then things change a little bit,” said Chairperson Sandra Button in a video interview in 2017. Bock explains the process by which a Best of Show winner is selected: “Best of Show winners have all won their respective classes. Each judge then gets a ballot, along with the chief of the honorary judges. The judges walk the winner’s circle and make their selection for the car they feel is he most deserving out of the 28 that won their classes,” Bock said. The selection is simple: “The car with the most votes wins.”

Over 50 years of attending, 40 years of judging, and now his ninth year as Chief Judge, Bock reflected not on how the event has changed, but how he has. “I feel like I’ve evolved over the years,” he said. “I’m an early car guy. I’m not apologizing for that, that’s just where my area of interest lies. But as the show has become more postwar, I’ve had to educate myself and I have learned to really appreciate post war custom coachwork. My knowledge and my tastes have changed.”

He noted that his passion is still intact. “I’m still going to buy a Packard and not a Ferrari, but I looked at the postwar Best of Show winner which occurred a few years ago which was a Ferrari (Jon Shirley’s Ferrari 375 MM Scaglietti Coupe in 2014) and the lines of that car and the proportions, and the balance, that was a best of show car. Thirty years ago, I didn’t have that appreciation and now I do.”

He has confidence that the event will evolve just like the judges have. “I think we’re going to see more Best of Show cars come from the postwar classes,” he said, “and I think that’s just fine.”